Bayern Munich are in a critical part of the season as the club continues to chase a treble this season. the Bavarians are three points behind rivals Borussia Dortmund and also in the semifinals of the DFN-Pokal and the round of 16 of the Champions League. 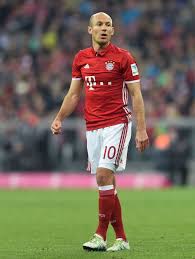 The team have endured a series of injury crises this season with multiple players sidelined for a period of time. however, one player on the way back from an injury that could help their course is mesmeric Dutch star, Arjen Robben. The 35-year-old has been out for a while with injuries but remains a vital member of the team.

He was rumoured to be suffering from Muscular ailment and also dental issues but it looks like he has fully recovered.  Robben was pictured going through the rounds in training at the club’s training ground undergoing some drills. He looked fit and ready to go as he underwent some basic running drills alongside one of the backroom staff.

The recent injury to Kingsley Coman has seen the club short on options on the wing and the arrival of Robben would provide a huge boost to the Bavarian club.  Robben despite his age still possesses the skill and excitement on the wings capable of scaring opposition defences.

His impact woudl be required in the second leg of the Champions League clash against Liverpool as the tie stands poised balanced at 0-0.  The former Chelsea ace experienced and quality would be needed it they are to overcome the plucky Premier League outfit.

In other news, Bayern Munich has been hit with the flu as multiple players have taken ill in the past 2 days. It is understood that Manuel Neuer, Franck Ribery, Robert Lewandowski and Matts Hummels are among those affected.

Bayern next facesWolfsburg in the League on Saturday as they look to keep up with leaders Dortmund.